VILLAIN: THE VOICES OF SHATTERED
In Shattered: Memoirs of an Amnesiac, A.E. Hayes opened a window for her readers to see into some of the darkest parts of her life. From her experiences with a traumatic brain injury and amnesia to the realities of living with Dissociative Identity Disorder, Hayes never shrank from the truth.
But that’s not the whole story.
While writing Shattered, Hayes was struck by the notion that she was often the villain in her own story. From that idea, Villain was born.
But what is a villain, really? The concept of good and evil has fascinated Hayes for a longtime, and Villain provides a space to explore that idea. But this book goes farther than that. Villain also gives voice to several of the alters that were created by traumas in Hayes’s past. From a gut-wrenching story of love gone wrong to an exciting tale of hijinks at a casino and more, the alters’ stories are sometimes harrowing and sometimes hilarious. But they’re always authentic.
Villain will entice and intrigue, and it will leave readers with one question: are they the heroes or villains in their own stories?

Love at the Edge of Seventeen, a YA anthology that released May 1, 2018, includes a short story by A.E. Hayes titled “Her First Fever.” Can a smart, stubborn girl look past the things she desires the most in life to help out her annoying, enigmatic biology partner – even if helping him comes with an emotional price?

SHATTERED: MEMOIRS OF AN AMNESIAC

A.E. Hayes wakes up in a bright hospital room on the afternoon of August 24, 2010, with no idea of who she is or what has happened to her. When her doctors begin saying words such as “traumatic brain injury” and “retrograde amnesia,” she realizes that she cannot remember anything at all – including the man sitting beside her who claims to be her husband.

Guided by numerous doctors, hospitals, trauma units, her husband, a mysterious person known only as Starlight Boy, and an equally mysterious voice inside her head that tells her to seek the truth, Hayes sets out to uncover the answers about her rare condition. But is her amnesia truly all there is to her story? Through various sources, Hayes must learn about her startling and often traumatic past – and how that past may permanently alter the future.

Raw and riveting, Shattered: Memoirs of an Amnesiac leads readers down a path of darkness, mystery, and redemption – where heroes are often villains, fiction routinely gives way to fact, and how, ultimately, the truth can be both the disease and the cure. 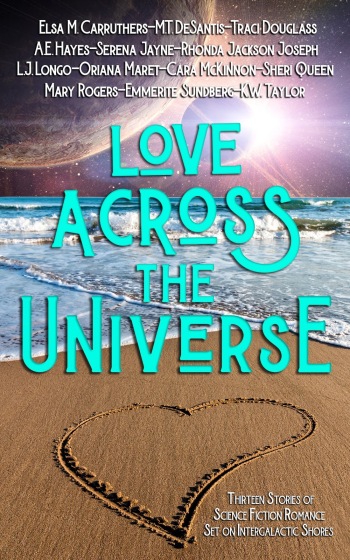 “Tristan’s Tryst,” a science fiction romance story by A.E. Hayes about a mysterious island and two lovers that explore all it has to offer, is featured in the anthology Love Across the Universe: 13 Stories of Science Fiction Romance Set on Intergalactic Shores. Pick up this steamy, scientific, out-of-this-world anthology by Stars and Stone Books.

“A Siren’s Song of Spring,” written by A.E. Hayes for the anthology Crazy Little Spring Called Love, (published by Stars and Stones Books) was released Wednesday, May 3rd, 2017. The tale features young siren Mariana, who, along with her two older sisters Piceana and Ariella, has been carrying down the tradition of their immortal kind for hundreds of thousands of years: to sing sailors a sweet, sad, and ultimately fatal song as the sailors navigate their ships around the rocky coasts and caves near Paestum, Italy. Mariana has always followed her orders in an effort to retain her immortality, as well as to follow the will of her father, Tyrrhenius, who has forbidden his three remaining daughters to ever depart from the coastal waters. But when The Aurora, a ship sailed by a young man named Orion, passes by on a windy April afternoon, Mariana is strangely attracted to the mortal being upon it. Despite the fact that she is forbidden to have any connections to a mortal man, should she use her voice for good and betray her people, allowing herself to be washed over by love – or should she betray her feelings and sing young Orion to his untimely death? Crazy Little Spring Called Love can be purchased in paperback or Kindle on Amazon.

Idol Meanderings features three short, creative nonfiction stories by A.E. Hayes (writing as Amanda Hayes). These tales discuss matters from health scares to heartbreak, and the collection can be purchased on Amazon.